Tours & treks from Atins are typically of low carbon footprint nature; you either walk or ride on horseback. Tours often include a ride by specially licensed 4×4 to get into the National Park.

In the last couple of years, Quad tours from Barreirinhas have become more popular with Brasilian tourists who frequent the Lençóis and arrive at Luzia’s in Canto do Atins. However, you will notice them only passing through Atins thus far.

Some travellers destined for Atins may arrive on one of the day-trip boats from Barreirinhas, which is actually quite a pleasant mode of transport as you’ll get to take in the sights of Vassouras, Mandacarú and Caburé along the route.

The best way to explore the Lençóis Maranhenses is by guided tours and treks into the park. Treks vary from one to four days depending on the enthusiasm of the group. Most treks would include at least one of the two oases Baixa Grande and Queimada dos Britos. The latter is the bigger and more beautiful one and can be found halfway across the park. A handful of families have lived here for generations. A stunning oasis in the middle of nowhere full of life and history, it offers a welcome stop and provides a place to rest.

The most challenging of the walks crosses the entire park over three to four days starting in Atins and passing through Queimada dos Britos and finishing in Santo Amaro, about 75 kilometres total. It is challenging, however taken at a reasonable pace and with plenty of water and rest stops, it can be achieved relatively easily. There are plenty of rainwater lagoons in which to take a refreshing swim and cool down along the way. At the end of the long trek weary travellers reach the town of Santo Amaro do Maranhão where they can rest and enjoy a few beers while sampling famous freshwater prawns. From Santo Amaro you may choose to return to Atins or continue on to São Luís by 4×4 and bus.

Bi-lingual guides are available and porters can be arranged to carry your packs (pack light!). It is advisable to bring a sunhat and plenty of sun block to protect you from the equatorial sun.

Shorter ½ to 1-day tours are often undertaken by a combination of Toyota and short hikes. Popular destinations are Lagoa Verde, Lagoa Tropical, Ponto de Mangue, the Cachoeira do Bozinho (a waterfall that spills its warm sweet water into the sea – only during the rainy season) or Rio Negro with a lunch break at Canto do Atins on the return way.

Most treks typically start at sunrise to in avoidance of the scorching desert heat.

Whilst Atins is just outside the Lençois Maranhenses National Park a small group of families settled just 3km inside the park along the sea. This settlement forms Canto do Atins. The trip from Atins to Canto makes for a formidable excursion along the fringes of the dunes of the park and can be done either on horseback or by foot. Make sure to stop for lunch and try the delicious prawns at at either of Luzia or Antonio’s restaurants.

The first stop on the boat day-trip from Barreirinhas down the Rio Preguiças towards Atins is typically Vassouras, a small community of families living on the river bank in front of the Lençóis Pequenos. Here, people make their first encounter with the massive sand dunes or just enjoy a refreshing drink of coconut water and feed the wild monkeys that live in the mangroves.

The next stop on the popular day-trip from Barreirinhas is the small fishing village of Mandacarú sitting further down on the other bank of the Preguiças River. The lighthouse in Mandacarú constitutes the highest point in the entire region and offers stunning 360-degree views across the vast mangrove river area, the Lençóis Maranhenses and his little sibling, the Lençóis Pequenos, across the Preguiças, Caburé, Atins and the sea. Mandacarú also has a few restaurants, regional crafts stores and a heliport (next to the lighthouse). 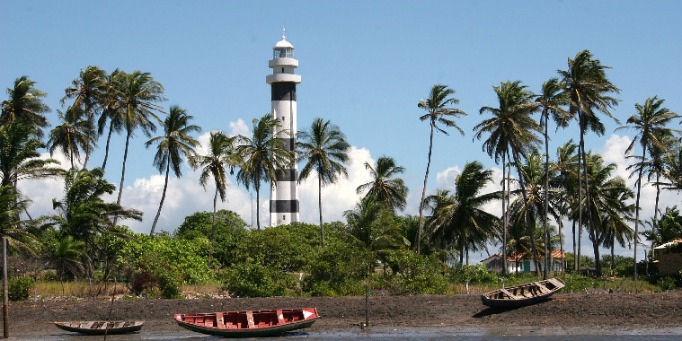 The final destination (if not continuing to Atins) on the day-trip boat from Barreirinhas is Caburé. Located on a narrow sandbank that divides the sea from the Rio Preguiças, Caburé is a pure tourist resort mostly frequented by day trippers from Barreirinhas, some of which may stay for a night or two. It is actually a small agglomeration of three to four restaurants and guest houses, well placed for a spot of lunch and a swim in the open sea or the calm river waters (you can cross from one to the other in a matter of minutes). Some locals say that in a few years the sea will break through to the river swallowing Caburé in the process.